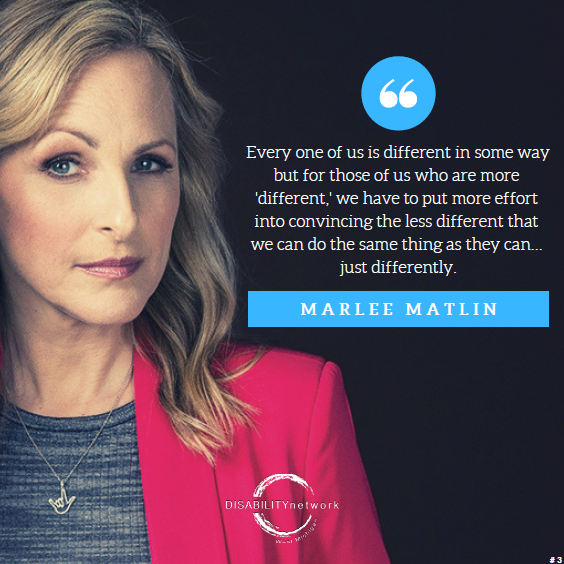 Marlee Beth Matlin (born August 24, 1965) is an American actress, author, and activist. She (1986) and to date is the only deaf performer to have won an Academy Award. Her work in film and television has resulted in a Golden Globe award, with two additional nominations, and four Emmy nominations. Deaf since she was 18 months old, due to illness and high fevers, she is also a prominent member of the National Association of the Deaf. Her longtime interpreter is Jack Jason.

2016 – Received the 2016 Morton E. Ruderman Award in Inclusion. (A $120,000 prize given annually by the Jay Ruderman of the Ruderman Family Foundation to one individual whose work excels at promoting disability inclusion)

Roy Frank “RJ” Mitte III (born in Jackson, Mississippi on August 21, 1992) is an American actor, producer, and model. He is best known for his role as Walter “Flynn” White Jr. on the AMC series Breaking Bad (2008–13). Like his character on the show, he has cerebral palsy. After moving to Hollywood in 2006, he began training with personal talent manager Addison Witt. They sought acting opportunities where his disability would serve to educate viewers, which led him to audition for the role in Breaking Bad.

Career Highlights:
2013 – Mitte received the SAG-AFTRA Harold Russell Award for his portrayal of Walter White, Jr. on the series; The Screen Actors Guild named Mitte as the spokesman for actors with disabilities and he is the representative of “Inclusion in the Arts and Media of Performers with Disabilities”, which employs artists with disabilities.

Activism:
– Appeared on the cover of the February/March 2015 issue of Neurology Now (published by the American Academy of Neurology). The issue included a short biography and his views on cerebral palsy, bullying, and his acting career. He is also a celebrity ambassador for United Cerebral Palsy.

Make Your Plans to Celebrate the Reintroduction of the Disability Integration Act with Us!

To celebrate the reintroduction of the Disability Integration Act, NCIL and ADAPT will be hosting a live streaming event on January 15 at 3:00 p.m. Eastern at the Muskegon Innovation Hub at Grand Valley State University (MEREC Building) Rm 200, 200 Viridian Dr, Muskegon, MI 49440. We will be offering a video and audio of the event so you can celebrate along with us!

Thanks to the ongoing efforts of our siblings at ADAPT, Senator Chuck Schumer (D-NY) and Representative Jim Sensenbrenner (R-WI) have set January 15 as the date to reintroduce the Disability Integration Act in the new 116th Congress. This early introduction is cause for celebration, and the excitement we generate early on will help build momentum for the DIA in this new Congress. Help drive the DIA forward and secure its passage in the 116th Congress by celebrating this momentous occasion with us! 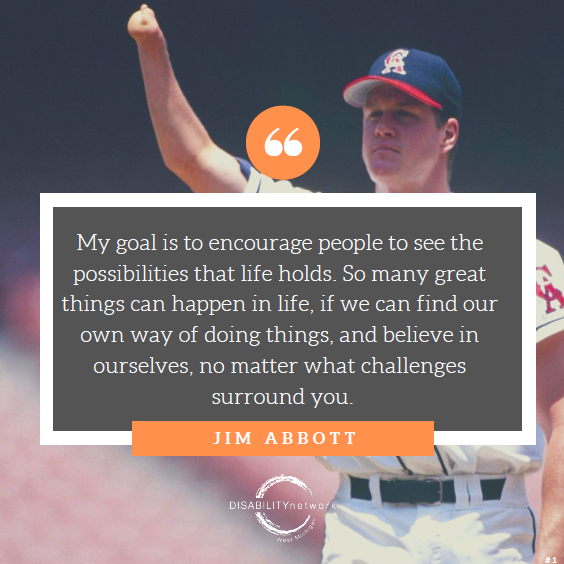 James Anthony Abbott (born in Flint, Michigan on September 19, 1967) is a former Major League Baseball (MLB) pitcher who played despite having been born without a right hand. He played ten seasons in MLB for the California Angels, New York Yankees, Chicago White Sox, and Milwaukee Brewers from 1989 to 1999.

1992 – Abbott was awarded the Tony Conigliaro Award, given annually by the Boston Red Sox to a Major League player who overcomes an obstacle and adversity through the attributes of spirit, determination, and courage that were trademarks of the Boston Star